Begum Shaw, Sydney Cove and the lascars from Bangladesh: A heroic tale of 1797 Australia-Bangladesh collaboration in Colonial Australia

In March 1797 at Ninety Mile Beach in the state of Victoria, Australia five British and 12 “Bengali”” seamen swam ashore after their longboat, Sydney Cove  was destroyed in in a storm. Earlier this ship, named Begum Shaw was obtained from Calcutta.  As was the system then,  most of the seamen, also known as Lascars were from the districts of Sylhet and Noakhali and the lascars of Sydney Cove/ Begum Shaw were no exception. 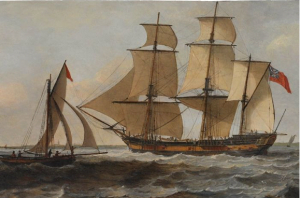 On the day of the ship-wreck of Sydney-Cove Sydney was a town of barely 1,500 people, and was  700 kilometres to the north.  The 17 that attempted to start an expedition to find Sydney left behind many fellow-survivors  stranded  on a tiny island in the Bass Strait. The brave 17 including 12 from Bangladesh had only one objective, walk to the then established settlement of Sydney.  This is what the official naval history of Australia wrote about the beginning of the expedition

“Sydney Cove sailed from Calcutta on 10 November 1796 with a crew of fifty under the command of Captain Guy Hamilton who had been retained by the new owners. The First Mate was Hugh Thompson and William Clark, a nephew of one of the new owners, was employed as Supercargo (an owner’s representative responsible for the cargo and its sale). The three other Europeans were the Second Mate Leishman, the Carpenter Thompson and John Bennet (possibly Sailmaker) and there were 44 Bengali sailors, commonly known as Lascars. “Interestingly in recent times current day Indian citizens crafting the linkage around Australia-India bilateral relationship  have claimed this story as only their own and have kept Bangladesh out of the picture, perhaps, invoking in the logic that all historical actions of Bangladeshis prior to 1947 belongs to India. “The small ship Sydney Cove sailed from Calcutta on the 10th of November 1796 with a crew of 8 Anglo Indians crewmen and officers, an Anglo Indian passenger and his manservant and 44 Indian Lascars, with cargo for New South Wales that included Rice and Rum”.

The survivor led by  27 year old Scottish merchant William Clark would later chronicle the story of their expedition.  Many consider it the most under-reported survival story of Australia that is also a most unique story of probably the first example of Bangladeshi migration to Australia in the most dramatic of circumstances. This saga took place  against the backdrop of the stunning coastal landscape of southern New South Wales; place such as Batemans Bay where successive generations of Bangladeshis would later make their home.

For two months in early 1797, the 17 men traversed rivers, rocks and beaches. By keeping the keep the coast in sight and using stars for navigation they marched north. On the way of their track it was their meeting with the Aboriginal people that saved them, for a while,  anyway for most of them as the majority of them would eventually perish.  .Their journey initiated the first prolonged encounter between Europeans and Aboriginal people beyond the confines of Sydney but subsequent history for obvious reasons in colonial times made no explicit references to the Bangladeshi lascars.  There is no doubt that the 12 lascars were as expedition-minded as the others who led them, a trait one notices in the people of Bangladesh even now.

The Bangla-Australian group  became reliant on the local Aboriginal guides — the new migrants were fed, ferried across rivers, and occasionally kept in camps overnight, and continuously shown the way north by Aboriginal men who sometimes walked with them.  They were shown the walk-ways traditionally used by aboriginals. The expeditionary group was forced to leave nine of the party, most of the lascars  behind at Morula and encountered  near drowning   at Bateman’s Bay but Clark, his Bengali manservant, and seaman John Bennet, pressed on towards Sydney.  Today history remembers Clark, Thomson and Bennet but does not name the lascars from Sylhet and Noakhali. On May 15, 1797 after walking for more than two months, a fisherman spotted the three remaining sailors, walking  along Wattamolla Beach just south of Sydney.

Their epic journey had come to an end. Today 230 years later this story is all but forgotten.  Nobody knows anything about the 12 seamen and indeed hundreds others who came to Australia in ships that often used to came to Australia via what was then the port of Calcutta.  The origin of the Bangladeshi lascars has also been obscured by the fact that India claims it as their legacy and presenting it as an example of deep link of India with Australia. I have researched the plight of the lascars described so poignantly in the book “The sons of the waves” by Steven Taylor.  In the maritime nations, Australia included,  lascars (almost exclusively from Sylhet in the early days, since 1757) used to be picked up from an Indian port,  taken to Europe, Australia, Europe  and simply abandoned.  In England lascars started to live near the ports and nucleated the first settlements in places like Brick Lane.  In early 1950’s my father Abdul Mannan Choudhury along with Mr. Aftab Ali (Head of Seamen’s associational UK) fought for the rights of the lascars and even did hunger-strike on the streets of London for the rights of the Lascars to stay permanently in UK.  We are left in the dark regarding the fate of the Bangladeshi sea-men who came to Australia. But no Lascar story can compare with the sheer drama of the one described here  that goes back to the earliest settlement in Australia and shows such settlements were not acts uniquely of Europeans. On the 50th anniversary of Australia’s relationship with Bangladesh Begum Shaw, Sydney Cove and the lost sailors of Sylhet and Noakhali represent a poignant tale.  It is a tale of friendship between Australia and Bangladesh in the context of the hard work and bold courage of the lascars even on the face of racism and colonialism.  Modern day Australia should not obscure the contribution of Bangladeshi people with a colonial mindset which had a propensity of not naming the lascars but presented every expedition in the narrative of the white captain.

It is interesting to ponder about the fate of the 12 seamen of Sydney Cove and indeed of the ones who got left behind at the Bass Straight.  Did they mingle with the local or the aboriginal population?  Did they go back to Sylhet and Noakhali?  Their story indicates a rich and dynamic  history of our people that has become almost completely invisible to our Bangladeshi popular culture; either here in the diaspora or back in Bangladesh.  The migratory spirit of our founder population, particularly our sea-faring people of Sylhet, Noakhali and Chittagong, Barisal and Khulna that constructed the present Bangladesh. The good people of Tathra have put up a monument to commemorate this journey. As Bangladesh tries to write her history of international engagement with Australia it is  unfortunate that many overseas Indian groups have attempted to alter this glorious history and role of Bangladeshis in the world by giving their unique spin and claiming credit exclusively for India for this expedition.  By taking credit for all pre-1947  Bangladeshi roles and contributions as their own India is actively attempting to diminish the historic international roles of Bangladeshis.  It is important for Bangladesh to officially engage with India on this topic, regarding this particular event as well as other events so that India does not take historical credit for actions of people who used to live before 1947 in areas that now constitute Bangladesh.