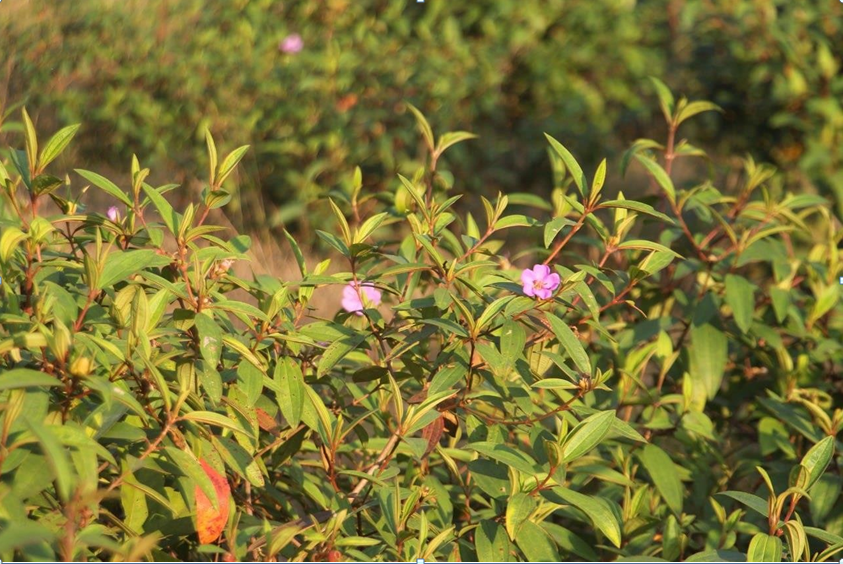 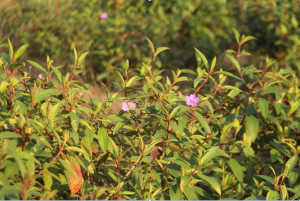 In October 2021, I visited a village which is a picturesque place named Kanihati situated in Hajipur, Sylhet, Bangladesh. (Latitude- 24.4166° north, Longitude- 91.9402° east, Elevation-21 meters/69 feet ) Kanihati is a biodiverse place enriched in different types of known, unknown, and wild plants. During the visit, I came across a beautiful pink flower whose leaf was like the bay leaf, and interestingly its fruit was like a berry-type fruit. It was bushy, plants were grown in fallow land. I was so curious to know about that flower, after asking the locals I came to know that they didn’t plant it. To them, it’s a wildflower, they used to eat the fruit which tastes sweet but after eating their mouth dyed with color from the fruits. It is much popular with the children as they like to eat it, also to play with it because of the color after eating, they enjoy it a lot. I took a lot of photographs of the whole plant and its parts. After searching the name of the flower on google by those pictures I could get that, its name is Melastoma Malabathricum, which belongs to the family Melastomaceae. In the Melastomaceae family, there are more than 4000 plant species in the world.

Melastoma Malabathricum is native to tropical and subtropical Asia, Australia, and the Pacific Islands. It also can be found in Singapore, India, Australia, Taiwan, Malaysia, and Bangladesh. It is one of the 22 species found in the Southeast Asian region. The plant grows wildly and abundantly throughout the tropics, especially in moist areas, and can be found in hilly areas. This plant is very common in open places, fallow lands, roadside areas, and as a weed in the tea garden. In Bangladesh, it can be found in the hilly areas of Sylhet, Chittagong, Bandarban, Garo hill of Mymensingh, Gazipur, Sherpur, and Jaydebpur. 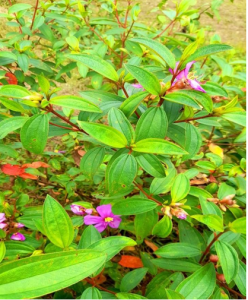 Melastoma Malabathricum is an evergreen shrubby plant, its average height is (1- 5 m) high. The plant prefers rich, well-composted, well-drained, moist soils, in a protected sunny site. It is susceptible to drought and frost. This plant is grown in a bush and colonizes rapidly due to its high dispersal capacity. Mostly its seeds are dispersed by birds. It can be propagated by seed or stem cutting. Its edible parts are leaf, fruit, and seed. The stems are reddish, covered with small scales. Branchlets are numerous. Leaves are elliptic and these leaves have similarities with the bay leaves but these are rough and don’t have any fragrance. Leaves are oppositely arranged and the petiole of the leaf is reddish. 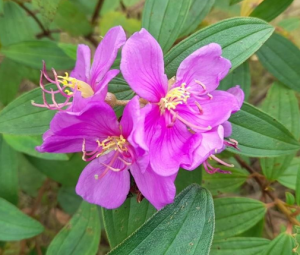 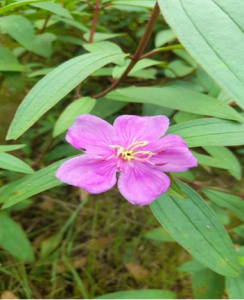 Flowers can be found throughout the year but mostly in the monsoon. The flowers are bisexual, up to 8cm wide, with petals that are light pink to dark magenta-pink, having five petals, the color of the stamens are yellow, blooms in a small cluster, and their life is so short as it lasts only a day. 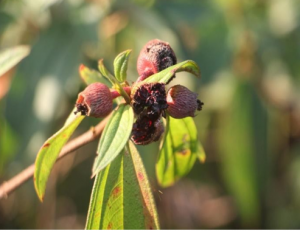 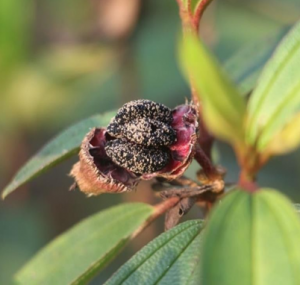 Fruits are round, berry-type, fleshy, and open irregularly when ripe to reveal the soft, dark blue pulp with numerous orange seeds. The fruits are edible, taste slightly sweet with the pulp staining the tongue blue-black as it is rich in anthocyanin. This staining is the reason for the name Melastoma which is a Greek word, meaning “black mouth”.

It has numerous medicinal as well as industrial values. To the mountainous tribe, it is used as a popular herbal medicine. The leaves, barks, seeds, shoots, and roots have been used to treat cut and wound, diarrhea, dysentery, toothache, and stomachache. Scientific findings also revealed the numerous pharmacological actions of various parts of the plants such as wound healing, antioxidant, anticancer, anti-inflammatory, phytoremediation, and antibacterial activities. Fruits extract is rich in flavonoids such as anthocyanins. can be used as a natural and eco-friendly dye for industrial purposes. It is also known as the “Tea indicator” plant. It can be grown as an ornamental plant for its beautiful flowers, hedges in parks and gardens, roadsides, riverine, and flowerbeds. It can be used in thematic landscaping like wildflower gardens, butterfly gardens, bird and wildlife gardens. Overall, it may be said that Melastoma malabathricum has great importance which is still unknown to us. Even though it is claimed that there are various types of the contribution of the plant towards the treatment, medicinal uses, or pharmacological activities, were also not proven. So, proper research should be carried out to investigate the phytochemical as well as pharmacological activities to develop new drugs in the future as well as to produce nature dye that could be eco-friendly. As it is an ornamental plant, people can grow it in their garden for aesthetic beautification and also to protect it from getting extinct